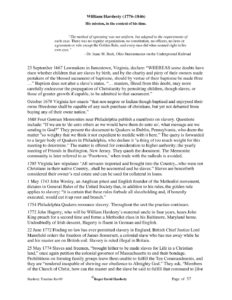 Click HERE or on the image above, for pdf file.
It’s an historic timeline, anchored on the lifespan of Rev. William Hardesty (1776-1846).

It was only after making life choices to advocate for racial justice that Roger David Hardesty ran his paternal line as far back as he could. Building an online relationship with Jason Lombardi – who, as a youngster, took it upon himself to maintain the Hardesty Cemetery in Malvern, Ohio – RDH first received anecdotal evidence that Rev. Hardesty can be associated with anti-slavery efforts.
“It was quite gratifying to find Rev. Hardesty and his father were both intimately linked to Rev. Francis Asbury (1745-1816), who would become one of the first two bishops of the Methodist Episcopal Church in the United States,” says Hardesty. “It became logical to me, to set the known facts of these Hardesty men in the context of Methodism’s shift away from their founder’s rejection of slavery.”
Rev. Hardesty was a contemporary of Rev. Richard Allen (1760-1831, below). Both were influenced by Freeborn Garrettson (1752-1827) and in relationship with Hardesty’s maternal uncle, Elder John Hagerty, Jr. (1747-1823).
(Rev. 11; 35 pgs.)