Injustice at the border. Two womens’ noble resposes.
At the Facebook group ForWARD: For White Accountability in Racial Dialogue, a friend prompted for analysis of personal conduct. She posted this reporting. It centers on fifteen minutes of video recorded by a White, middle school teacher detained at an immigration checkpoint more than thirty miles within ‘United’ States borders.

“As white persons, who want to give up our privilege and amplify the voices of people of color, do we think Shane Parmely’s stance did those two things?” asked our discussion leader. I paraphrase her initial set of study questions:

1) What stands out?
2) Does she un-center whiteness?
3) If we were in her situation, how would we have done this? Or follow-up? To de-center ourselves and follow the leadership of POC who have direct experience with immigration harassment?

I am not ‘on-camera’ talent, however. When speaking my truth to congealed knots of armed men, my heart races. My throat goes dry. When recorded, I always wish I’d made better word choices. I’ve grown accustomed to 180-second opportunities to testify; I never spend those moments trying to calm my breathing. Invited to share 30-minutes testifying before a Federal judge, in debrief I discovered I hadn’t even heard the judge interrupt my recitation to engage in constructive argument.* Blood had rushed noisily through my ears.

What stands out for me in Parmely’s conduct is that – suddenly accosted in leisure travel – she had the presence of mind to challenge authority. As a matter of course. She did not simply assert her citizenship (Whiteness), to be swiftly restored to liberty. Parmely advocated Constitutional protections where they have been revoked. She defended Americans’ Freedom of Movement. People of Color’s voices were not available in her car, but she did confront law enforcement’s intended, race-based rousting of those who’d be barricaded in her wake.

“It is easy for White folks to think they hold no responsibility with this system of privilege,” contended the NYU Center for Strategic Solutions, “after all … privilege does not require the conscious participation of Whites.”

“Decentering Whiteness requires dismantling a system that has become the status quo,” said authors. “We believe dismantling these systems requires the action and commitment of individuals who form communities dedicated to confronting and challenging inequity.”

And here is where Parmely really stands out in my estimation. She enlisted a child to record the armed standoff. She employed power analysis that poorly funded schools are less likely to teach in our tiered educational structures. She risked social blemish to post video of legitimized Federal lawlessness. Plucked from her feed by the San Diego Union-Tribune, bits now circulate in hefty media channels. CBS This Morning picked up her story, and gave Parmely subsequent interview. Time she shared with a Latina co-worker.

The word got out.

As to the question of whether an action must be led by People of Color in order to be legitimate, I give you offhand observation by JoAnn Hardesty. The African American civil rights agitator said “White people built segregation. Ultimately, they are the ones who must dismantle it.”

Assuming she had a hunch that it would go viral, handing the video to a PoC-led organization might have created opportunity to elevate their media presence, and frame the injustice with their own narrative. If they had initiative to follow through, and if media outlets value reporting without regard for who offers it. Once at the gate of what gets broadcast on television news, I followed natural inclination to zero in on the source. It was, after all, Parmely’s experience. 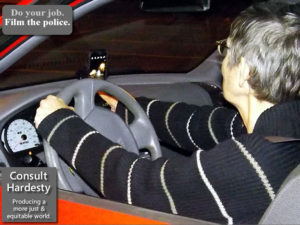 I’d also like to point out that the educator was engaged in Copwatching.  When schoolteachers, neighbors, and study group members broadly adopt the practice, a positive social good becomes likely. Street safety, protection from unconstitutional use of force, is likely to rise. When effectively shared, general perception of illegal conduct and the community’s refusal to abide by it, gets disseminated. Consensus may build into political will.

In communities where civilian complaint is sincerely received, such video is often the only in-the-field evidence that can controvert false police narratives. I look forward to the day when folks consider copwatching part of their civic duty. The general public will begin to see paper policy as fake: a sham overlay upon actual officer conduct.

The ForWARD group is to be lauded. Book study also has capacity to build rooted and mutually shared conviction. We learn from each other’s attempts to move from the cerebral and into direct community engagement. The author of the above post, having received dozens of responses to her study questions, perceived respondents wanted to address Parmely’s communication style.

She then offered this video, for us to contrast and compare. I’m now better able to pre-visualize civic duty. Get over those jitters. To feel as if my role is part of something greater.
(15 mins , nearly ten million shares)

*Judge Simon offered Consult Hardesty a 30-minute block, to initiate two days of public testimony in a 2014 Federal hearing … as he took advisement on the fairness of a plea deal to reform illegal policing. The partners then offered their initial ten minutes to a Native woman, unjustly traumatized by police violence.