Why is the FBI investigating ‘Black extremists’ but not the KKK? Jeff Sessions could barely answer the question pic.twitter.com/NZRobn3154

Mayor Edward Tevis Wheeler trotted out a spokesperson, who relayed “The Mayor evaluates our participation in the JTTF on an ongoing basis, and is satisfied with our current involvement.”

The FBI “is taking some heat from historians, academics and former government officials for creating the new ‘BIE’ term,” says Southern Poverty Law Center. “Non-government experts are citing a wide range of concerns related to this report; ranging from civil rights issues to political bias to institutional incompetence.” To this I might add structural intransigence.

The BIE racial identity construct appears recently concocted.  Foreign Policy referenced Virginia law enforcement training that conglomerates “domestic terror groups and criminally subversive subcultures which are encountered by law enforcement professionals on a daily basis.” (Italics mine. It might be interesting to note the FBI Assessment was secretly circulated in the week immediately prior to White nationalist violence during Unite the Right, at Charlottesville, Virginia.)

Milquetoast assurance by Portland’s Mayor, serving as Police Commissioner at his pleasure, did not reveal whether he’d become the first City official to be granted the FBI’s Top Secret  Sensitive Compartmented Information Security Clearance, which would be necessary to receive substantive report on JTTF activity. It’s more likely he’s just whistling in the dark while employees report to a clandestine body.

Wheeler complacently oversees a police bureau (PPB) that shepherded fatigued White nationalists onto TriMet buses following Patriot Prayer’s April “March for Free Speech.” A participant in that fracas knifed two on a Portland train to death in May; in anti-Muslim hate crime.* The ACLU today announced it would file Federal suit against the City, for violating the US Constitution in June: after PPB detained hundreds protesting Patriot Prayer’s downtown “Freedom Rally,” a week following  those White supremacist homicides.

In the above video, Rep. Bass asks Sessions whether the FBI has done a report on White Identity Extremists. It’s not the kind of curiosity you’ll find in a Mayor and City Council who give political cover to PPB’s Anti-‘gang’ Unit. Targeting young men of color, without articulating race at all, is higher on their agenda. 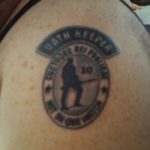 Given Oregon’s establishment as a white homeland, and the KKK’s historic influence on city government, local authorities who’ve taken oaths to defend the US Constitution might convene public hearings to assess for PPB officer membership in right-wing organizations like Oath Keepers and the Constitutional Sheriffs and Peace Officers Association. Much effort is devoted to cops cataloging tattoos on people of color: no initiative screens police for this graffiti (above). “As hate group membership rises across the country, police departments need to do more to ensure that people who hold these beliefs are not on the force,” informs a Georgetown Law professor, before offering investigative and corrective recommendations.

Civil rights protections from corrupt policing are not to be expected by Portland’s current, caretaker government. Earlier this year, Wheeler aligned with Sessions, to void an Obama-era plea deal with the US DoJ to bring about constitutionally sound policing. The duo sequestered local police reform. That 2012 Settlement Agreement made provision for quarterly, community-responsive Town Halls. Successive, all-White City Councils refused to allow residents to meet with academics and police scientists. Open hearings are impossible to imagine.

Enabling language from Sessions’ 2017 memo: “Local control and local accountability are necessary for effective local policing. It is not the responsibility of the federal government to manage non-federal law enforcement agencies.”

Let the stench of local government collusion with a lying US Attorney General sink in.

US DoJ Civil Rights Division investigators knew oversight had not substantively changed since their Findings (right) declared the City’s police exoneration scheme a “self-defeating accountability system.” Both parties tacitly understand that Sessions’ premise of local control does not exist.

*NOTE: PPB officers did not summarily execute the alleged killer. A “known white supremacist with a long criminal record and a recent history of public displays of racism” lived. Though, in a police standoff, he “held a knife in his right hand and some type of container — water or beer — in his left hand.” 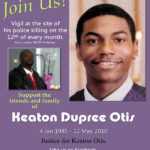