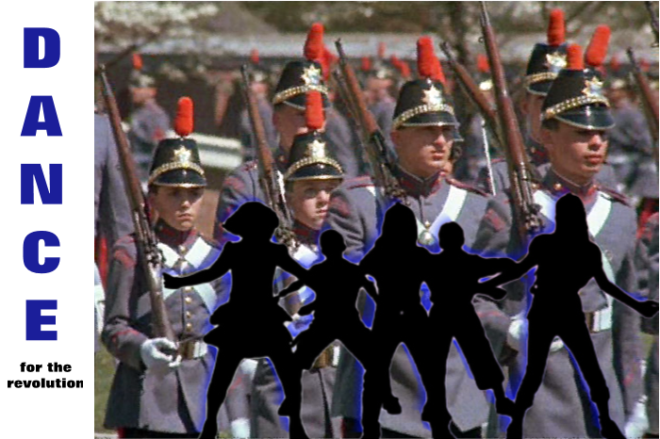 A cautionary tale. Guns represent lethal power. Those with honest-to-God political power do not generally align with protest agendas. Who said,

As a social justice advocate, I’ve heard the quote used to mollify purists. It has always carried to me a hint of incrementalism, distinct from “Keep Your Eyes on the Prize.” Know the above quote is attributed to Otto von Bismarck, a Prussian war leader who turned on those who brought him to power.

It also pertains to art.

A call has gone out: #MarchForOurLives will demonstrate nationally next weekend, to ban the sale of assault weapons. “No civilian should be able to access these weapons of war,” say organizers. Messaging demands vague ‘background checks’ for any gun purchase.

I consider grass-roots action a good thing, generally. Emerging youth leadership is a welcome indicator for progressive change in partisan, deadlocked government. I feel compelled to caution adherents to this cause that noble sentiment – reduction in gun violence – will not necessarily produce the peaceful result they expect. “The art of the next best,” as practiced by those who have real power, will undoubtedly inform another agenda; one that is already under way.

In 2014, the American Civil Liberties Union reported War Comes Home: The Excessive Militarization of American Policing. Those who saw the film Do Not Resist know direct link … between transfer of surplus Department of Defense armaments … and brutal, multi-agency suppression of dissent following the police killing of Michael Brown.

The City of Portland, Oregon amended the tail end of a 5-year contract a year ago, to boost purchase of live-round ammunition to a total “not to exceed amount of $4,000,000.” The four-million-dollar Police Bureau authorization was allotted a mere five minutes in their agenda for presentation, testimony and deliberation. This is not a functioning democracy.

It is my firm suggestion that those who seek unilateral disarmament by The People – and imposition of criteria for whom the Bill of Rights applies – convene a few times … to assess how raw power behind the scene will implement their demands.

Folks must ask themselves why revolutionaries so clearly insisted that “the right of the people to keep and bear Arms shall not be infringed.” A demand quickly added to the compact authorizing government. Could it be that they recognized likely conditions, at the fall of a republic?

Using Portland as a case study, our police force is not subservient to local authority. Until the Sessions-era, U.S. Department of Justice relaxed terms of a Federal plea deal, the City had been unable to get the bureau to comply with a plan to eliminate unconstitutional use of force. (See McKelvey.)

Simultaneous to increased training with live-round ammunition, Portland City Council codified free-speech suppression which the Mayor admits may be unconstitutional. This, after a police riot injured and incarcerated justice advocates at City Hall, upon passage of a new bargain with the Portland Police Association. Like the ammunition contract, an unexpired union agreement emerged from undemocratic process in surprise introduction, to avoid all but sham public participation. (Surveillance: whose eyes are where? depicts Federal security agents called to City Chambers for deliberation of police bureau agenda items.)

‘Background checks,’ may seem innocuous to do-gooders, marching for safer community. This demand must also be seen in terms of a new, national, law-enforcement agenda.

People of Color never fare well, when those in authority decide who gets civil rights protections.

Beyond that, in an era of declining violent crime, local police are being re-purposed nationally to assess the mental status of those they accost. Not content with skirting judicial review by plea bargaining, County District Attorneys revel in power to divert others to ‘care’ in a psychiatric arena. We must ask ourselves why mental health assessment tasks were not given to those with careers in social work.

I contend you stand at the cusp of ‘thought policing.’ Which will be a far cry from trial of fact by peers; in an open setting and with a backdrop of clearly codified law. Consult Hardesty supported a mother, as she freed her Black son from state hospital incarceration after criminal charges had been dropped and he’d been deemed mentally ill. Think for a moment how your civil rights will be protected. Public defenders are under-funded; how well are legal minds suited to argue with medical professionals, over expensive-to-refute diagnosis? This is the realm of ‘background checks’ for capacity in gun ownership.

You may disagree with me, that – since the terrorism of 9/11 –national leadership has pivoted toward a Security State … and that constitutional protection for your privacy has long been in abeyance. Emerging high-school-age leaders never knew a time when local law enforcement was not completely integrated with secret police surveillance at a Federal level.

I suggest participants assess for endless war, when deciding whether street marching has ameliorative effect over real power. I can tell you, when it comes to policing, there are dozens of boards and committees intended to wear out accountability advocates’ aspiration for policy change: they have no influence over behind-the-scenes policy makers. With eyes on National Rifle Association lobbyists, those who march may actually be playing into invisible hands of those who seek Authoritarianism.

At the very least, I counsel that marchers put pre-conditions in place. Pre-emptive and one-sided surrender of your liberty is not what the American Revolution was about. See that police reform is carried out prior to banning gun ownership: it’s actually likely to lead to safer streets.

Before advocating for unilateral disarmament, and designation of whom in your community shall not purchase guns, consider that there is no national registry of civilians killed by police and corrections officers in the United States. Standards by which civilians are to be prevented from gun ownership will not be applied to law enforcement, who hide repeat offenders – individual officers classically escalating in violence – from public awareness, let alone data collection by police scientists.

I’ll leave you with vision for a different sort of youth-led street action. One that might actually subvert influence wielded by the power elite. Consider taking advice from America’s founders: form well-regulated and decentralized militias. 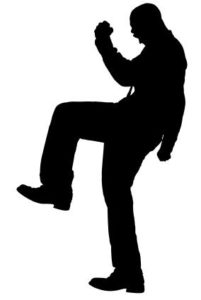 Imagine them as dance teams. Hear the sound of marching drummers; accompanied by flutes, if you prefer. Highly orchestrated moves would demonstrate discipline and commitment to joint effort.

My ancestors trained prior to the Civil War to end slavery (and in preparation to seize Native land) with sticks on their shoulders at militia musters. They elected their own officers and chose as cohesive units whether to answer state governors’ calls to war.

Unseen forces in concerted effort to demean the U.S. Constitution will recognize the gesture for more than historical relevancy: they, like local police, are highly attuned to threat detection and any change of strategy by adversaries.

There is a downside. War-monger diplomats such as Bismark follow Rules of Engagement to elevate military wrath. Portland Police forsake paper de-escalation policy in favor of brute force. Far from abject shouts at empty buildings, you may have to dance as if your life depends on it.

I’d suggest claiming the name of ‘dance militia’ in college sports entertainment. There will be security in sidling up beside an innocuous marching band, witnessed by fans in the bleachers. Legitimacy may come in collegiate competition by those deftly handling simulated AK47s. For those favoring the politics of disruption, interjecting fanciful, regimented combat simulation in say, The Rose Parade, would make violent response less savory for those with the power over life and death to interfere.

NOTE: I was going to use Benjamin Franklin’s 1755 quote: “Those who would give up essential Liberty, to purchase a little temporary Safety, deserve neither Liberty nor Safety.” It continues nicely: “Such as were inclined to defend themselves, but unable to purchase Arms and Ammunition, have, as we are informed, been supplied with both, as far as Arms could be procured …” But I am conflicted. The statesman wanted the royal treasury to subsidize frontiersmen seeking to subvert tribal sovereignty by force of arms.