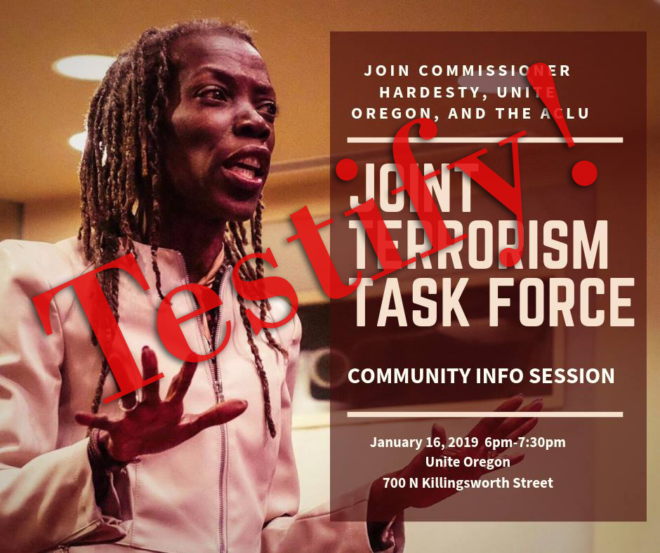 Portland taxpayers cover salaries for an unknown number of City employees … and local authorities have no idea what they do for a living. We simply know they are authorized to secretly violate your civil rights, and kill with impunity.

Commissioner Jo Ann Hardesty (image above) made it a campaign pledge: to divest the City from surveillance and other – more energetic – undercover operations. With this post, I ask for an audit of the city’s relationship to the F.B.I.’s clandestine Joint Terrorism Task Force (JTTF).

I learned a few things in researching F.B.I. contentions about the Portland JTTF. The F.B.I. were caught lying to investigators following an extra-judicial homicide in Oregon. After discovering wiretaps approved in a secret court had been used to entrap a U.S. citizen at Portland, U.S. Senators accused the F.B.I of lying to the U.S. Supreme Court. After discovering the F.B.I. had prompted the Department of Homeland Security to, at their whim, put the Portlander on their ‘no-fly’ list, a Federal judge ordered the agency to disclose the practice to targets, defend the deprivation of rights, and provide a means of appeal.

Summary:
I conclude the F.B.I. are a bad influence on local justice delivery, especially Portland police. “The JTTF has not been holding to a behavioral standard worthy of public trust.”

And, from Consult Hardesty:

2 thoughts on “Feds a Bad Influence on Portland Police”